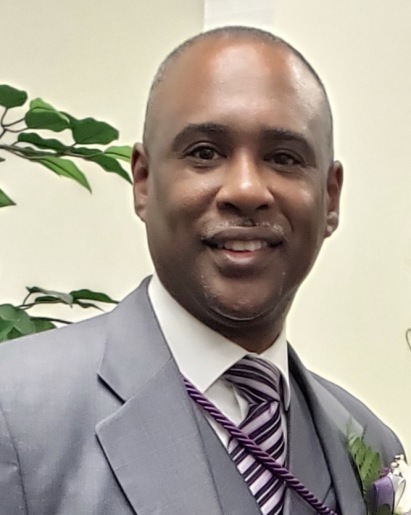 Alan S. Robinson is a native of Boynton Beach, Florida. He is the fifth of eleven children born of Superintendent Robert Lee Robinson & Missionary (Dr.) Barbara Robinson. He was educated in the Broward County School System where he graduated with honors as valedictorian from Ely High School in Pompano Beach, FL.  Later, he graduated Magna Cum Laude from Morehouse College, with a Bachelors of Science degree in Biology.  He furthered his education in medicine, seeking to become a physician, at Emory University School of Medicine in Atlanta, GA..  During that time he was commissioned as an officer (Ensign) in the U.S. Navy.

After having completed two years of study at Emory, the Lord had other plans for Alan S. Robinson, calling him to the ministry.  With a struggle to maintain these two lifestyles and a family, Alan S. Robinson chose to yield to the Lord’s call to minister and provide for his family.  Alan S. Robinson became Elder Robinson in 1987, after being ordained by the late Bishop J.D. Husband, while serving under the late Bishop John Cooper of the Valley View Church of God in Christ.  In 1991, the Lord led Elder Robinson to start his own ministry, Abundant Life. The Lord revealed to him this name from John 10:10b “I am come that they might have life and have it more abundantly.”  Through prayer and fasting, this ministry moved from the den of his home to its present location.

Pastor Robinson serves faithfully on the local, district and state levels.  Presently, he serves as Pastor of the Abundant Life Church of God in Christ, in Southeast Atlanta.  Pastor Robinson served as Chairman of the Northeast District under the leadership of Superintendent Walter Fleming, whom he also worked with as Assistant Chairman on the Central Georgia Finance Committee, and Secretary of the Central Georgia Ordination Committee.  In October 2006, the late Former Presiding Bishop Chandler David Owens appointed him Chairman of the Pastors and Elders Council of Central Georgia Ecclesiastical Jurisdiction.  In August 2011, Pastor Robinson was appointed Superintendent of the Atlanta District, under the leadership of Bishop Norman O. Harper of the newly South Central Ecclesiastical Jurisdiction.  Shortly afterwards, he was appointed Chairman of Finance. In December 2013, Bishop Harper called upon Superintendent Robinson to serve even closer with him as an Administrative Assistant within South Central.

Many have seen divine providences manifested throughout this ministry by one who believes in miracles and healings, and one who speaks deliverance into the lives of people near and far.  People have traveled distances to be in his ministry and experience the wonderworking power of the living God through his preaching, laying on of hands, and the blessed oil God anoints through him.  The Abundant Life Church of God in Christ has grown both spiritually and naturally under the leadership of this great man of God.

In April 2006, the Lord led Pastor Robinson to institute a Life Development Course, which is a process he adapted partially from the best-selling book, “The Purpose Driven Life.” This course is designed to help Christians to develop and mature spiritually.  Pastor Robinson believes that every Christian should serve actively in ministry as this course seeks to address this philosophy. One year later, as a result of his stewardship and vision that the Lord gave him, Pastor Robinson led his church ministry to the burning of their mortgage in 9 1/2 years, releasing them from all financial obligations.  His teachings have been both inspiring and motivating.  He continues to be a mentor, teacher, scholar, but most importantly, a committed man of God who is concerned about bringing souls to Christ.

During the historical 103rd International Holy Convocation in St. Louis, Missouri, Pastor Robinson delivered an Inspirational Message before delegates from all over the globe.

Pastor Robinson is married to Lady Richunda Robinson whom he so lovingly refers to her as “Honey”.  He has one son and three daughters.